Selenium is a trace element that is naturally present in many foods. It is only needed in small amounts and is nutritionally essential for humans because it plays a critical role in reproduction, thyroid hormone metabolism, DNA synthesis, and protection from oxidative damage and infection.

There are two forms of Selenium that exist. The first is inorganic (selenate and selenite) and the second is organic (selenomethionine and selenocysteine). Both forms can be good dietary sources of selenium.

Most selenium is in the form of selenomethionine which is found in animal and human tissues. Traces of selenium are also found in body proteins. Skeletal muscle is the major site of selenium storage, which according to the National Institute of Health “[accounts] for approximately 28% to 46% of the total selenium pool”. Selenium can be found in your blood, urine, hair, and nails.

Here’s a list of foods that are rich in Selenium:

* - The richest sources of selenium. 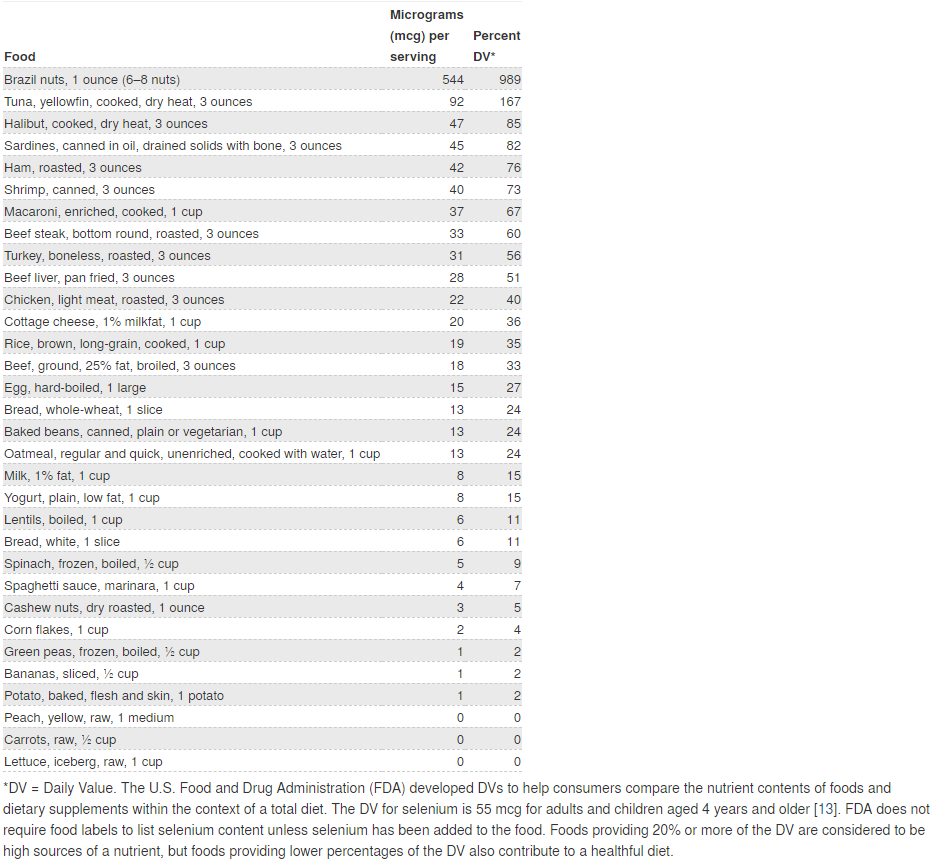 In the table below, we show the recommended dietary allowances for Selenium. 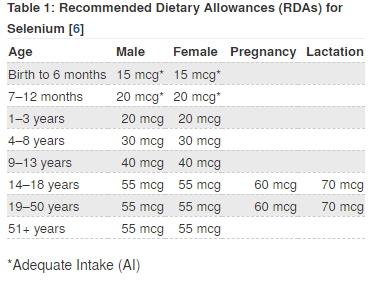 Selenium’s antioxidant properties help to reduce the damage of oxidative stress. Working along with other antioxidants such as vitamin E, vitamin C, and glutathione, selenium helps to fight the damage to cell membranes and DNA caused by free radicals. This type of cellular manipulation has been linked to aging and disease formation. Antioxidants help to neutralize free radicals and put a stop to their damaging effects.*

Selenium is an essential nutrient needed to maintain proper thyroid function. Selenium helps to regulate the production of thyroid hormone T3. The thyroid gland needs to be in tip-top shape, as it plays a vital role in regulating body temperature, metabolic rate, reproduction, growth, and more.* 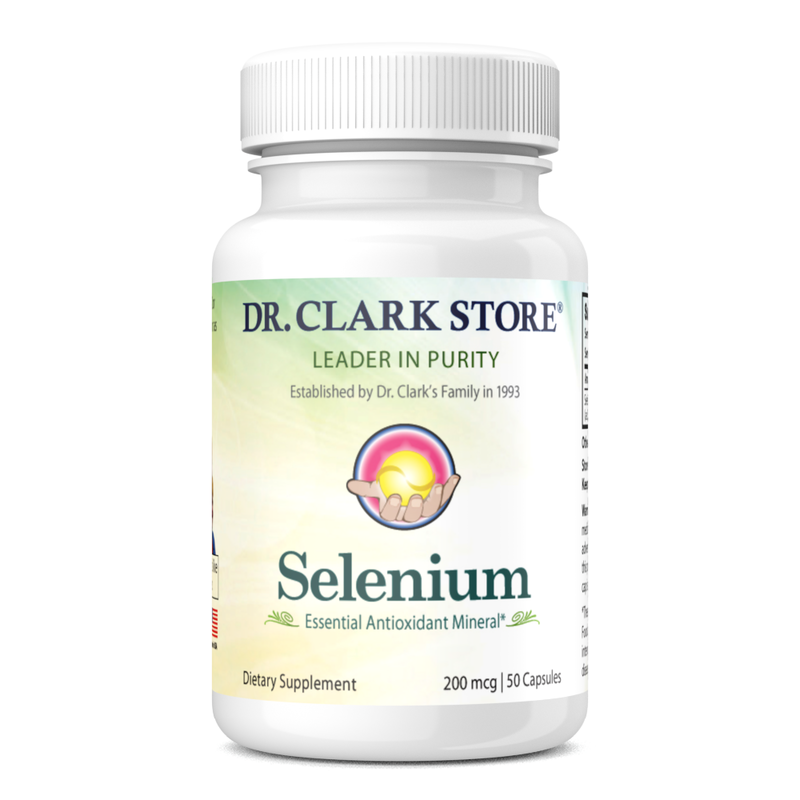 Selenium also helps to build white blood cells. These are the antibodies which destroy foreign pathogens that can result in the formation of illness and infection.*

The blood thinning properties of selenium help to reduce blood clot formation. Selenium may also reduce levels of LDL cholesterol. Build-up of blood platelets and cholesterol in the veins and arteries are contributing factors to cardiovascular events.* Selenoproteins help prevent the oxidative modification of lipids, reducing inflammation and preventing platelets from aggregating. Experts have suggested that selenium supplements could reduce the risk of cardiovascular disease or deaths associated with cardiovascular disease. Although the studies show great promise, the limited clinical trial evidence to date does not support the use of selenium supplements as a way to prevent heart disease, particularly in healthy people who already obtain sufficient selenium from food. The supplements are meant to be an addition to your normal diet, they are not meant to become the primary source of nutrition.

The Risks of Too Much Selenium

The Selenium concentration is much higher in the thyroid gland than in any other organ in the body. Selenium has important functions in thyroid hormone synthesis and metabolism, similar to iodine. It has been proven that selenium is important, however too much of a good thing can be a bad thing. Chronic high intakes of selenium in either the organic or inorganic form has similar negative effects on the body. Here are a list of symptoms of too much selenium in your system:

Selenium toxicity is not only a result from supplements. Brazil nuts for instance, have high amounts of selenium which can cause toxicity if consumed regularly. The table below shows the highest levels of selenium that each person can take. 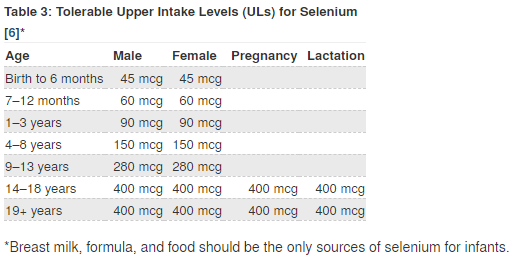 Foods provide an array of nutrients and other components that have benefits for health, nutritional needs should be met primarily through foods. In many cases, fortified foods and dietary supplements are useful when it is not possible otherwise to meet needs for one or more nutrients.